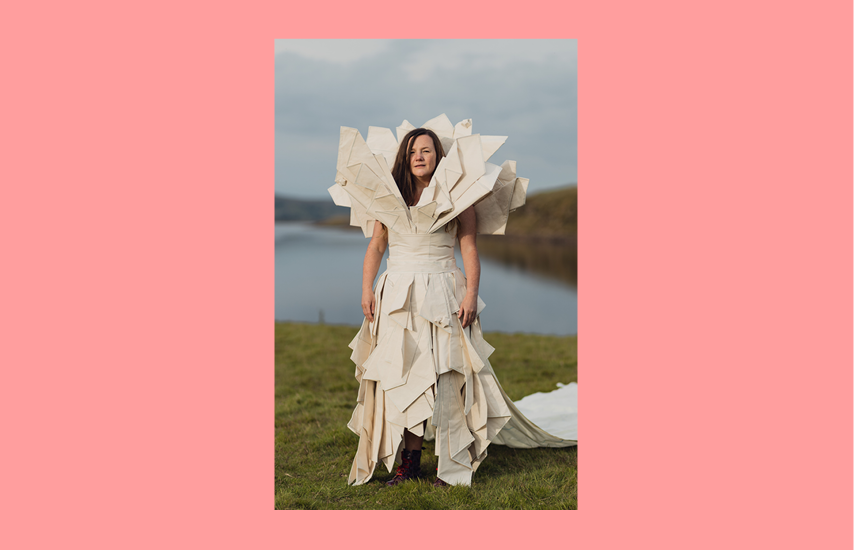 I found the short film evocative and powerful in its telling of a disabled person’s experience in the world. It consisted of many shots of Lisette outside, by a vast yet incredibly still reservoir. Visually, this was a great choice for the setting. Although huge, there is something understated about a reservoir as a body of water. It doesn’t constantly ebb and flow like the sea, or flow like a river. Its placing as the backdrop to the film really made poignant the natural power it holds.

In addition to beautiful scenic shots by Rob Irish, and clever costume choices, Lisette’s spoken-word dialogue propels the film along. She employs techniques like anaphora, repeating lines such as “I am Lisette. I am voiceover” and “I am not linear” that enhance the way that the personal and political collide in an utterly inseparable way.

While some of her lines are explicitly political – such as the facts and figures that are reeled off about austerity cuts, fuel poverty, and how disabled people were disproportionally affected by the pandemic – others are more metaphoric in nature. Such as when she describes exasperation. “It feels impossible,” Lisette says. “It feels like folding water.”

This idea of the impossible task of folding water is of course the namesake of the film, and a theme that is constantly referred to throughout it. We are taught in physics class that water fills the shape of the container that it is held in. In Lisette’s film, she explains that disabled people, like water, are always having to fill the space of the container they are in. They are the ones that make the adjustments for the benefit of others. Lisette says that she must “fold herself into shapes impossible like water” to jump through the hoops that society wants her to, even though this makes things incredibly difficult for herself.

Writing the Missing – Folding Water calls for a change. It is angry in its questions: “What if you fold?” Lisette asks. “What if you adapt to our systems?” It is powerful. It is moving.