REVIEW: Tom McLeish, The Poetry and Music of Science 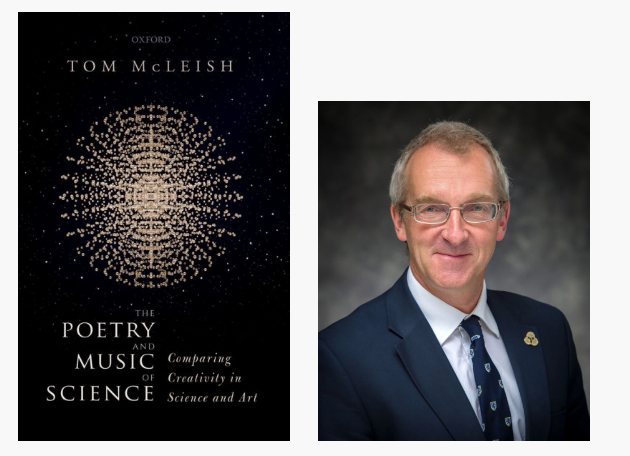 “Mum, I’m not sure the school’s got it right, the way they teach all these subjects in different lessons.” These are the wise words of an eight-year-old on Twitter who, according to Professor Tom McLeish, perfectly encapsulates the ethos of his new book, The Poetry and Music of Science.

There exists, in McLeish’s opinion, a “Creation Narrative” that goes something like this: first comes the creator’s initial vision of a phenomenon or object, followed by a deep desire to represent or understand it. Thus ensues a series of attempts to create this representation, which are inevitably met with an armada of constraints and failures. In the darkest moments of these frustrations comes the spontaneous up-welling of ideas from the subconscious, finally resulting in a glorious aesthetic and emotional response to hard-earned success. McLeish’s twist in this tale is that this narrative is a universal one; be it for Newton or for Picasso, for an historian delving into past worlds or for a novelist dreaming up new ones.

His investigations are teeming with these parallels. Think of the “elliptical orbit” with which both a novelist and a physicist must observe their work alternately from up close and afar in order to see their solutions; or the shared trial-and-error method needed to construct both proofs in mathematics and symphonies in music.

This book is far from just a musing on these topics, however; it calls for a revolution of our perceptions of both science and art. In his positions at both Durham and York universities McLeish found an overwhelming number of students who were not pursuing science subjects as they deemed them “not creative.” He boldly claims that “anyone can learn old methods and do complex calculations. Scientific method is only one half of the task of ‘doing science'”. The rest requires divining mappings from familiar ideas to those that are unfamiliar, the ability to stretch analogical thinking to its boundaries. This is, of course, an inherently creative process. It requires a deep “intertwining of thinking and feeling” that people seem to believe is absent in the sciences.

But why is this important? Why should physics be considered a humanity? Why should English literature students study maths? Because McLeish fears that it is the dividing of our thought worlds which allows us to compartmentalise so many issues as if they are unrelated or insignificant. It has allowed us to neglect our effect on climate change, for example, and let our relationship with nature develop from an ignorant one to a harmful one.

For those not convinced by an eight-year-old, McLeish calls upon the Richard Feynman quote on the question of whether science subtracts from the beauty of a flower: there are all kinds of interesting questions in which “the science knowledge only adds to the excitement, the mystery and the awe of a flower. It only adds.” Or, in McLeish’s own words: “doing science is the greatest form of writing poetry in the world.”