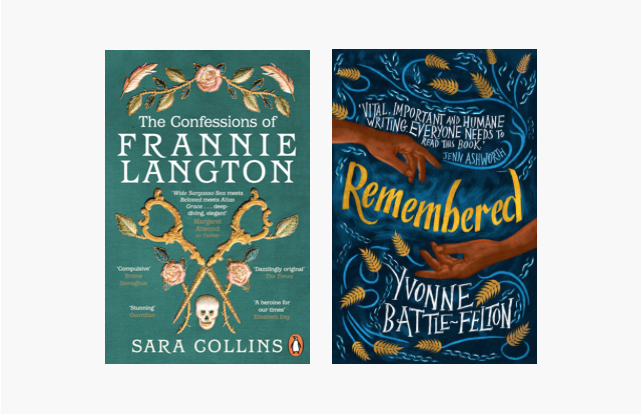 Sara Collins, Yvonne Battle-Felton and the chair, Simon Savidge (of savidgereads) had a fascinating discussion on historical fiction, influences of their writing, and the importance of talking about the past to reflect on the present.

Sara Collins’ debut novel The Confessions of Frannie Langton introduces a new gothic heroine, putting a Jamaican woman at the centre of the storytelling. The novel is about former slave, Frannie, who is now on trial at the Old Bailey for the murder of her employers and must tell her story to seek the truth. Collins explained how the novel came from a life-long love for gothic romance novels. This led to her thinking “why hasn’t a black woman lead a gothic romance?”, with which she embarked to write one herself, because “questions lead to novels”.

Northern Writers Award Winner Yvonne Battle-Felton’s novel Remembered follows the story of emancipated slave, Spring, who looks back on her life from hospital. The novel tackles motherhood, the past, family, and home, in a context which complicates all these subjects. Battle-Felton wished to show the people behind the ‘slave narratives’, to show “who they were” not merely “what happened”. Her writing stemmed from a want for control and a love for endings, believing that an author would have control of what happens, yet found the opposite in letting her characters show her instead.

Simon Savidge questioned both authors on their ways of dealing with the shocking context of slavery within each text, asking “how did you bring love and joy to such a horrid context?”. Both authors agreed that, of course, there were human beings “in all that mess”, and they still experienced love and family. The question “can our humanity really be stripped?” was raised. Both novels showed the presence of humanity in terms of the characters relationships and the love they experience.

An interesting point that was made was the choice of using post-emancipated slaves to tell their stories. Both Collins and Battle-Felton agreed they wrote about “freedom as a fear”, due to the lack of framework set up, making life just as horrific without the means for ‘freedom’ to occur. Collins’ novel provides an extended metaphor for this, with Frannie’s love affair with her ‘Madame’ demonstrating a kind of Stockholm syndrome, being in love with someone whom she is “completely dependent” upon, showing the lack of freedom in a ‘post-emancipated’ world.

Collins stated she did not want to write about slavery specifically, but similarly to Battle-Felton she came to it through doing something “different”. Collins made her protagonist the centre of a romance, placing her “in Jane Austen territory”. Battle-Felton explores relationships of all kinds, displaying the humanity that could be found among the horrifying context of slavery. Both authors felt it was their job to show the feelings experienced, unlike historians who focus on the facts. Both novelists found that there was a relationship between who controls storytelling, who can love, and who’s anger society tolerates. These novels fight back, placing black women as storytellers and lovers who’s anger we applaud.