REVIEW: Peter Pomerantsev, This Is Not Propaganda 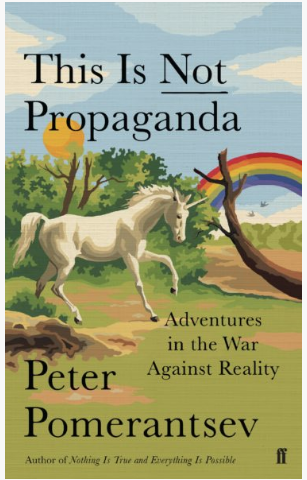 Does the truth exist anymore?

On a wet Sunday afternoon, we gathered in the Palace Green Library, the room dim but glowing with the golden spotlights. Peter Pomerantsev, “the pre-eminent war reporter of our time” as The Guardian describes him, enters the room, smiling at his young children, who happen to be sitting beside me in the back row. He appears uncannily normal, a father providing his children with entertainment to pass by this rainy Sunday, but as he ascends the stage and starts to speak, it is clear this is not the case.

In his new book, This Is Not Propaganda: Adventures In The War Against Reality, Pomerantsev masterfully weaves events from his father’s life under Soviet rule with experiences from the world around us now – where he believes disinformation is destabilising the foundations of democracy. Peter Pomerantsev is here to enlighten us, horrify us and question us. It is a truly exhilarating discussion, laced with the terror that populism is on the rise and lies are now being seen as truth.

Many in the audience are fascinated by his analysis of the language some male politicians are employing. The “carnivalesque” has been used by citizens as a way of “punching up”, as Pomerantsev puts it. Used in that way, it brings those in power down to earth, it reminds them and us that their power is transient and illusory. It is a form of protest. When this linguistic style is adopted by powerful male politicians, it taken on a sinister form. It is being used to “punch down”, snatch society’s masses’ little power away, and ultimately wholly oppress and silence them.

Pomerantsev also discusses the subversion of protest in the 21st century. In the 20th century, loud and bold resistance was used to oppose the corrupt. Today, with every search made online potentially tracked and used to target us, self-expression renders us vulnerable. Silence could be used as a form of protest. In light of scandals such as Cambridge Analytica, this is especially resonant.

There is also an interesting discussion on how political parties acquire support today. Whereas before, parties and regimes would promote an ideology, today most campaigns are fractured, aiming to attain support from random sections of society. Arguably, Dominic Cummings’ most successful contribution to the Leave Campaign was not nationalism or secret nostalgia for imperialism, but a campaign he centred around animal rights being abused by the EU.

Perhaps most appalling to Pomerantsev is the position journalists are currently in. Pomerantsev believes that politicians are blatantly and carelessly lying, refusing to accept they lie when questioned. Journalists must have power to hold these people accountable. With that gone, politics is entering a dangerous, unchartered territory where truth is irrelevant.

In true Durham Book Festival style, Pomerantsev stressed the importance of reading as a means to imagine a perfect society and therefore commit to realising it. As the discussion ended and Pomerantsev was led off the stage, the audience was in utter awe. He, on the other hand, asked his young children how they found it, to which they responded, “Daddy, it didn’t make any sense!”

It seemed much of the audience felt like agreeing about the nonsense of it all – albeit for different reasons.