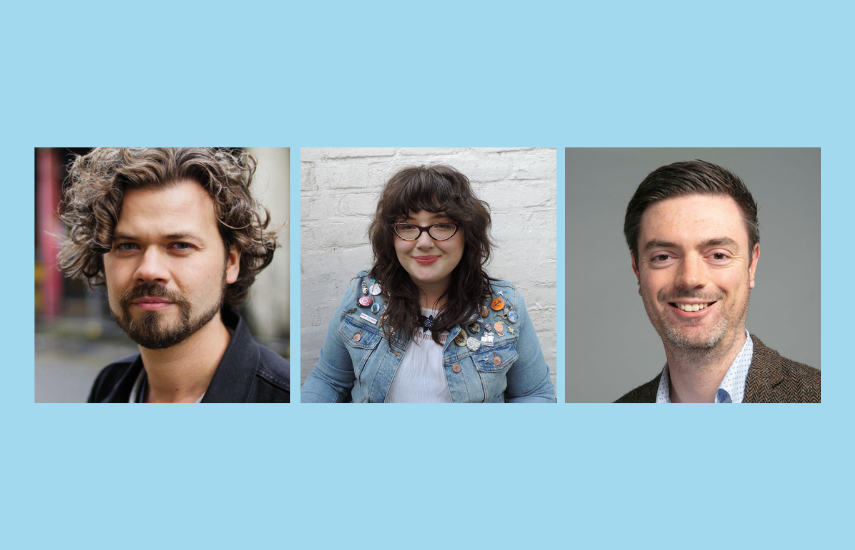 A fitting end to Durham Book Festival, the final event of the programme was the North East Poetry Showcase at the Gala Theatre. Three exciting voices in the North East read from their collections: Jo Clement, Jake Morris-Campbell, and John Challis. The showcase was an incredible display of storytelling, voice and resurrection, acting as a wonderful return to live event readings.

Jo Clement began the showcase by reading from her debut pamphlet Moveable Type (New Writing North), a lyrical and dynamic collection reflecting on the poetics and politics of Gypsy identity. The pamphlet carves out a homecoming, and as Clement reads, we are led to the Appleby Horse Fair in Cumbria, the largest annual gathering of Gypsies and Travellers in Europe. We are introduced to her Grandad Jack, his playing cards, and the horses, or ‘hoss’, with ‘ponies who dapple / this dark plot like bulbs newly popped’. The poems are much like bulbs in soil: a sandy loam of memory, tenderness and musicality, they tug and roll, and when Clement reads a kind of field jazz is achieved. There is an instinctual rhythm to her rendering of landscape, as well as her use of form, as her lines unfold: ‘Is it time to move on? Let me sit this stone / on the market’s pile. Tell the capital I am a Traveller / under open sky and yes, our bonfire’s still raging.’

The capabilities of poetry as a force for fighting back are similarly captured in Jake Morris-Campbell’s book Corrigenda for Costafine Town (Blue Diode Press). Morris-Campbell’s collection is firmly rooted in the North East, and we are taken to the Robinson Library, Marsden Rock and up the M56. Throughout the reading, Morris-Campbell’s command and confidence of verse is apparent. Stanzas are loaded with irony: in ‘Restoration’, we meet Eva who ‘has come from Košice, Slovakia / to Quarry Lane, South Shields / to restore matchbox-by-matchbox a fresco of Marsden Rock’, whilst information is refracted through a post-Brexit lens, where ‘Charlie is telling us this over pints / of John Smith’s’. There is a sharp wit and humour to the poems. The poem ‘Errata Slip for a Northern Town’ is divided into two columns, ‘For:’ and ‘Read:’ and in Morris-Campbell’s reading, the divergence between the two – between the ordinary and poetic – is apparent, with ‘Seagulls screaming down Keppel Street’ translating to ‘Melody of seabirds strumming the shore’. Yet this is precisely the point: even in the ordinary and banal a mythology is captured. Gas stations bathe in ‘ancient sunlight’, whilst there is a stoic beauty to sitting on the ‘inside lane of the M56 / sun sinking…like a hard-boiled egg’.

Finally, John Challis reads from his debut collection The Resurrectionists (Bloodaxe Books). Challis’s poems read like the extraordinary orders of an apothecary. An audience participates in listening to the post-mortem of a poem, whilst also realising that the tissue on the table (or the paper) is still viable. The ‘drowned possessions’ dredged from the Thames: ‘unexploded payloads, bone dice and oyster shells…the taken, the lost,’ are residual, existing as living ingredients. Challis speaks to the dead, and though veering close, does not join them, but builds ‘a bibliography of bone’. It is, in fact, the later poems, particularly those celebrating the birth of his daughter, that bridge effortlessly the state between life and death, as ‘some magic doctor plies / her trade to bring back from the brink your love / who’s giving birth to love’. By the end of the reading, Challis has stepped towards the light, conducting a resurrection on his own terms, but for the love of someone else, ‘a father, still a child / bowing / to repay his debt’.