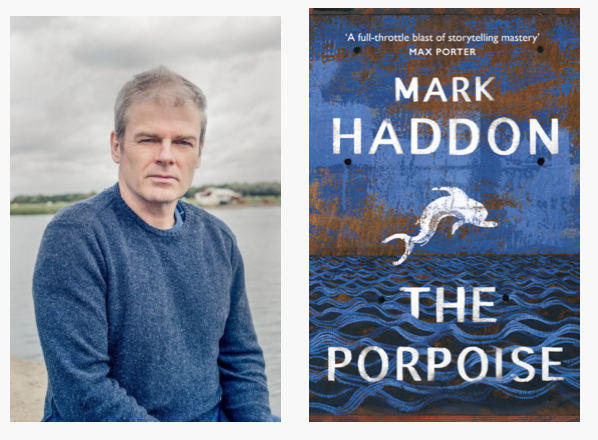 “I was tired of reading those polite, beige stories about people like myself, who could realistically receive a Boden catalogue in the post. I was bored of writing novels where nothing happens and short stories where everything happens. I thought, why not write a novel where everything happens?” This according to Mark Haddon is how his latest book The Porpoise came about: a novel in which everything really does happen. Pirates, time-travel, the ghost of Shakespeare, as well as “combat scenes that would give Lee Child a run for his money” to quote The Guardian. What more do I need to say? Taken with the idea of adapting a Shakespeare play, but firmly against “taking a masterpiece and make a mediocre copy of it,” Haddon finally found a solution by using a play that’s “just a little bit rubbish.” Pericles is the story of a young prince who, after revealing king Antiochus’ incestuous relationship with is daughter, is forced to flee around the Mediterranean, on the run from the king’s hired assassins.

The play, according to Haddon, has “very little of Shakespeare’s beautiful language” and a “melodramatic plot,” allowing him to do whatever he wanted with it. Fundamentally, The Porpoise is a story about the “ring through the nose that men call femininity.” There is a reason Haddon chose to set this re-told Shakespeare’s story surrounding sexual abuse in the 21st century,and it is that, despite what we would like to hope, this kind of violence is still prevalent in our society today. For this reason, he deals bluntly and uncomfortably with the terrible consequences of sexual desire and masculine pride. “I have always been more interested in women’s stories,” he says. “Men get to have more adventures, but women’s internal experiences are much more interesting.

Men’s stories centre on what’s outside, whereas women’s are all about the inside.”A far cry from his constrained narrative voice in The Curious Incident of the Dog in the Night Time, this story mostly takes place in an intoxicating blur between the victim’s reality and imagination. Inspired by writer Ocean Vuong’s line “I didn’t know the cost of entering a song was to lose your way back”,Haddon was compelledby the double-edged “power of stories to comfort and help but also the threat of getting lost inside.” “I write for the version of me that hasn’t read what I’m writing yet,” Haddon replied, when asked about his writing process. He states that writing is mostly like “climbing a steep hill: hard work but with a beautiful view at the end of it,” but that there are moments of “reaching into the dark” and getting “something that just works.” What he searches for, in reading and in writing is that “weird dark zone whiff, the smell of special things that aren’t the most obvious.” All things considered, I think it’s safe to say that The Porpoise has quite a whiff about it.