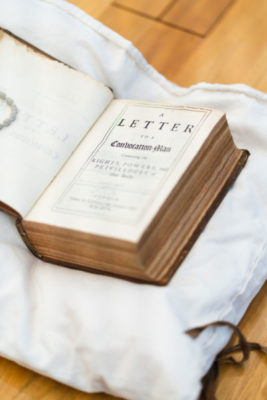 As I sat down in Palace Green’s Barker Research Library, a question was posed to the room. Why did we come today? In other words: why do we want to look at literary letters?

“I absolutely love looking at people’s letters!” a lady laughed in reply. Indeed, as Durham English faculty member, Dr Laura Mckenzie, explained, we have a desire to snoop into the private lives of others as a way of connecting to beginnings, and uncovering truths.

The letters displayed were personally selected by Laura, although most are connected to William Plomer, a South African and British author who became a stalwart of the London literary scene – and a man of many letters. The care and protection that the library places on these letters did not go unnoticed: we were inside a secured glass box; no coats; no bags; no pens; no photos. It really did feel as though we were being let in on a plethora of dirty literary secrets.

Eleven letters were placed around the room and, once Laura gave introductions to each, we were free to snoop as we pleased. Of course, most letters centred on books.

“It is now finished”, Elizabeth Bowen informs Plomer in 1963, of her novel The Little Girls. In 1965, Vera Brittain writes to Zelda Freidlander that she “might” use the title Testament of Youth for her new book. In 1908, Hugh Walpole recommends to a Mrs Darwin, Charles Marriot’s The Kiss of Helen, “which is very good indeed” (although he warns not to be “misled” by the last page – according to Walpole, “it is simply a plea for free love”).

Behind the tantalizing book references lies an insight into 20th-century history. In a 1928 letter to Plomer, Edmund Blunden discusses the executions of Frederick Guy Browne and William Henry Kennedy for the murder of a police constable, which he describes as an “example of England’s disease”. Meanwhile, Virginia Woolf’s letter to Plomer in 1940 is discomforting in its description of warplanes flying “hedge-top” (a term meaning “leap-frog”) over the trees. A particular favourite of mine was a letter written in 1977 from Daphne du Maurier to Norman Hidden, which is the only one typewritten (spelling mistakes were amusingly corrected with the blue ink with which she signs her name), signalling the shift in time, and with it, the methods of communication.

The most striking element that pervades the letters is the level of emotion within them. As Virginia Woolf asks Plomer if he could visit for the weekend, “Hitler allowing”, her characteristically humorous and controlled tone seems to become sorrowful, as Laura points out that the letter was written six months before her suicide. It is telling that Laura has left Basil Bunting’s letter to his estranged daughter in 1966 until last, as it is emotionally charged with grief and hope: “I am very thankful for this chance to end the long silence between us […] I am still poor and old now – but life has become full of hopeful things.” The deeply personal nature of the letter neatly summarised the vulnerability of the voices that is often left out of their literary works.

To refer back to Laura’s question, it seems we want to read these letters not only to uncover truths of literary works, but to uncover personalities that hold strange and exciting stories in themselves.