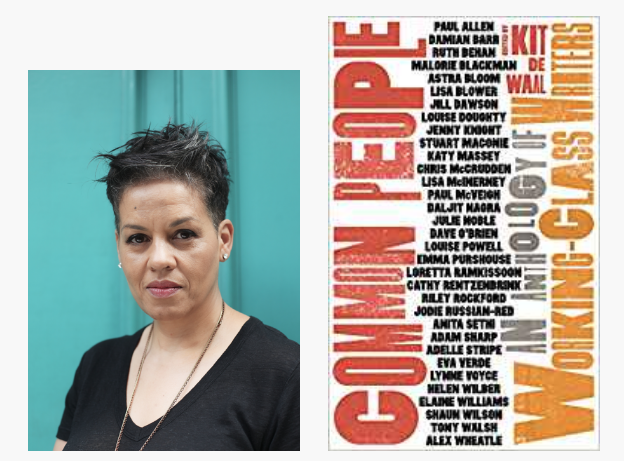 Chaired by Unbound’s John Mitchinson, there could not have been a more fitting setting than the Redhills Miners’ Hall for writer and editor Kit de Waal to celebrate Common People: An Anthology of Working-Class Writers. Surrounded by portraits and tapestries of the key figures in mining and trade union history, de Waal was joined by Louise Powell, Paul McVeigh, Jodie Russian-Red and Adam Sharp. Each of these working class writers is amongst the thirty-four whose pieces were featured in this anthology.

The event began with a short documentary film featuring Louise Powell, entitled This Place is Going to the Dogs. Filmed at Wheatley Hill greyhound track, Powell revisits her childhood spent at Easington’s own – now defunct – flapping track. With the shrinking of the industry, Powell comments that this track is now amongst only a handful still operating in the UK, and reflects on what this means for her identity.

Readings from each writer followed, with a standout section of Jodie Russian-Red’s hysterically funny and woefully relatable story of a wedding gaining big laughs and applause throughout. Paul McVeigh read at length from his chapter in the anthology, which concerned the hierarchy of siblings during his childhood in Northern Ireland. Sitting comfortably in a childish first person, McVeigh cheekily admits it feels like “cheating” to write from his younger perspective. But Adam Sharp’s harrowing tale of his mother’s pregnancy and his parents’ drug abuse really caught the attention of the Durham audience, with an eerie quiet throughout.

“It is absolutely non-fiction,” de Waal explains: Common People came about to give writers from a working class background a chance to share their story. “Seventeen are published and seventeen are unpublished writers,” she says, and there are plans to bring together another anthology that tells stories from across Ireland. “There’s an international relatability to poverty,” says Paul McVeigh, and with that there seems to be a real opening for an anthology like Common People. Whilst being wide in scope, there’s an alarming resonance for these stories with the Durham crowd.

As the writers speak, it feels this anthology has done far more for them than earn them readers. On top of that, it seems to have given them a confidence many working class people can struggle to attain. Louise Powell even asserts that writing for the book “allowed her to accept her own Middlesbrough dialect and speech”; something that can feel like a hindrance when publishing largely resides in the south of the UK. Adam Sharp jokes that “I had such a lack of confidence because I was working class, I wasn’t even confident I could be classed as working class.” Jodie Russian-Red exclaims, “when I told my work colleagues I was submitting for the collection they said to me: ‘You’re not working class, you’ve been to Center Parcs!’” The audience roars with laughter.

By creating a space for these voices to be heard, Kit de Waal has edited together a life-affirming collection of memoirs for British working class people to be seen and to see themselves.