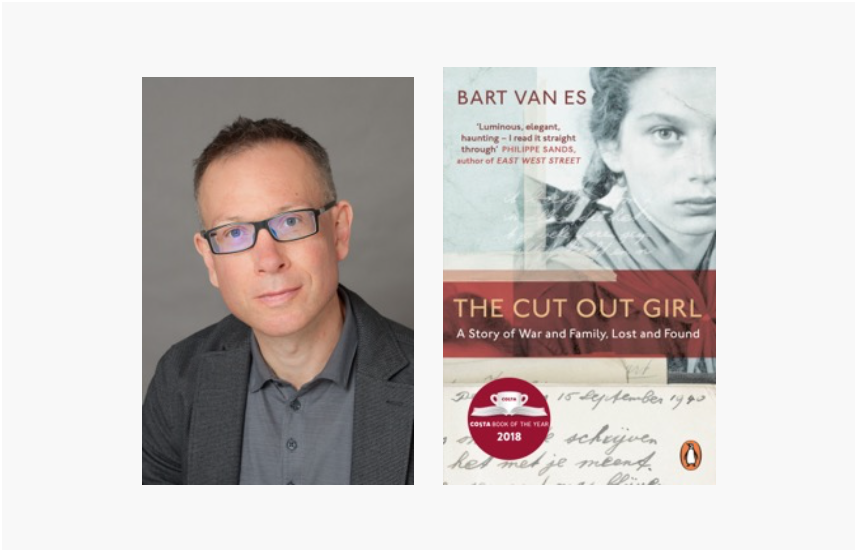 The hushed, muffled whispers echoing around the Gala Theatre as I enter for Bart Van Es’ talk on The Cut Out Girl are enough to tell me that this is going to be an intimate discussion. His novel follows the story of Lien, a Jewish girl who was taken by Van Es’ grandparents’ family during the Nazi occupation of Holland in World War Two. The subsequent sensitive nature of the background to the novel leaves me in anticipation. How will Van Es handle these sensitive issues in his discussion?

Van Es is honest throughout. He reminds us that the events of the novel are unexpressed traumas, Lien very much lived in them and therefore she is merely retelling her experiences. He recalls how “she decided to share her story with me”; Van Es feels honoured to have been able to reconnect with Lien and give voice to her story. He openly discusses the writing of the novel; he was very conscious that he was writing through the eyes of an eleven-year-old girl. To Van Es, the novel is a “child’s occluded vision on history”, it is by no means an extensive account of Holland under occupation.

He skillfully refers to the title of the novel The Cut Out Girl with both its literal and metaphorical resonances. Literally, it refers to the cut-out paper girls which Lien cut and pasted into a scrapbook as children do. Yet the title also refers to the cutting and pasting of Lien herself into multiple circumstances. She moved to a new house nine times during the occupation in order to remain hidden, and Van Es reiterates that some of these moves she does not even remember.

There is a silence in the audience at this point. I would think this is due to the sheer horror we all feel when discussing the Holocaust, particularly in fiction which seeks to bring those times to life again. Yet for Van Es, this is the whole point. It is through novels which investigate the Holocaust through the mind of a child, that really deal with the individual experience.

The novel very much deals with trauma in all its intricacies and uncomfortableness. Van Es crafts his novel with perfect realism and highlights to the reader parts of Lien’s narrative she did not remember. Perhaps this is why his narration is so encapsulating and believable – it draws attention to the credibility of a true story.

Van Es talks with great candor about the first meeting between Lien and himself. There is something extremely fascinating about an untold story and this very much reverberates around the theatre in this moment. The author describes how he met Lien and how, slowly, she began to open up and tell her story to him at her kitchen table. She began pulling out artefacts and documents which helped to unlock her memory. Van Es says Lien had decided in this moment she trusted him. One can only imagine the incredibly intimate relationship that now exists between the two: writer and subject.

The novel also deals with Lien’s experience of sexual violence. Van Es admits to us, in thenow even more silent venue, that this was the most difficult and uncomfortable chapter to write. His deliberate choice of a frank narrative style was to ensure it was “in no way titillating”. He tells us how “she was very technical” in the way she told him her story, having spent time in therapy following the war.

Lien’s narrative, this intimate discussion, and Van Es’ own journey researching, highlights that people are individuals, not statistics. Van Es’ personal story of family, personal struggle but ultimately, of truth, does not shy away from the reality. The Cut Out Girl very much encourages an individual view into historical events, rather than just the generic and impersonal facts we’re presented with in text-books that offer little human insight.

Though these narratives are uncomfortable at times, they need to be told. Van Es seems very mindful that it is an extraordinarily brave thing to reveal the uncomfortable truths of Lien’s story to the world.