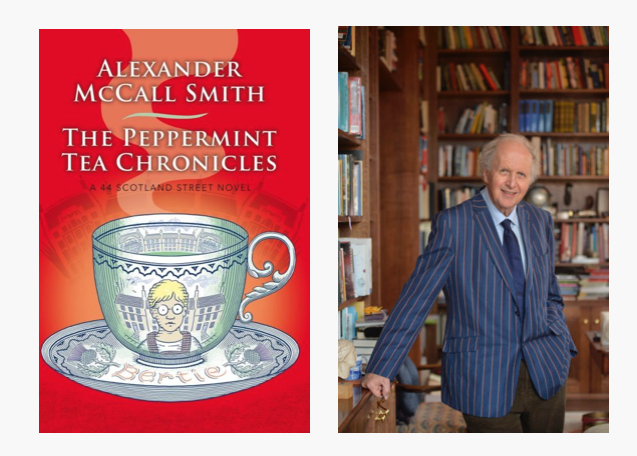 On Wednesday 9 October, television writer Michael Chaplin interviewed the prolific author Alexander McCall Smith in a packed out Gala Theatre. Warm, glowing floor lamps surrounded Chaplin and McCall Smith on stage as they chatted and laughed along with the audience, the author regaling us with insightful anecdotes. McCall Smith has written a number of stand alone books as well as multiple series, one of which is the serialised 44 Scotland Street, published in The Scotsman newspaper everyday. There were five books on the table onstage, all new publications of McCall Smith’s this year. He joked, “When I met my current London publisher years ago for the first time, he shook his finger at me and said, ‘Just remember, one book a year, one book a year,’ McCall Smith shrugged, smiling, “But rules can be creatively interpreted!” What became apparent through the course of the interview was that McCall Smith is a discovery writer, as he confessed,“Ideas come to me almost fully-formed”. He does not plan extensively, preferring instead to sit down and write what comes to mind, commenting,“Sometimes something happens that I didn’t anticipate at all!”

A lover of travelling, McCall Smith described his experiences in Botswana, Edinburgh, Italy and Australia, and how they correlate to moments in his books. He described in hysterical detail the personal story of how he wound up hiring a bulldozer from an Italian car rental company whilst on holiday, which led to his novel My Italian Bulldozer, the first in his Paul Stewart series, which precedes The Second Worst Restaurant in France.

There were moments of solemnity amongst the hilarity; Chaplin and McCall Smith shared a mutual agreement that they take refuge in their characters in the inevitable times of loneliness that accompany a writing career. McCall Smith left his job as a Professor of Medical Law at the University of Edinburgh to pursue writing, and while he stated that he does not regret the decision, he explained that he does miss the company and described a dream he sometimes has of saying goodbye to his students in a final seminar.

The emergence of the digital age came to the forefront of the interview as McCall Smith joked that he and his wife ‘overdosed’ on the television show The Killing, and that it is perhaps more socially acceptable to binge David Attenborough and Jane Austen. This nod to the rising prevalence of media as a pervasive influence on our lives took a more serious turn toward the end of the interview as McCall Smith gave a stirring speech in response to a question from the audience regarding Ma Ramotswe’s forgiving nature in the beloved The No.1 Ladies’ Detective Agency series. He spoke emphatically about the importance of kindness in a society that thrives on the toxic ‘cancel culture’ that pervades public discourse, to which the audience gave him a round of applause as these words seemed to capture perfectly the sense of humanity embedded in all of McCall Smith’s work.