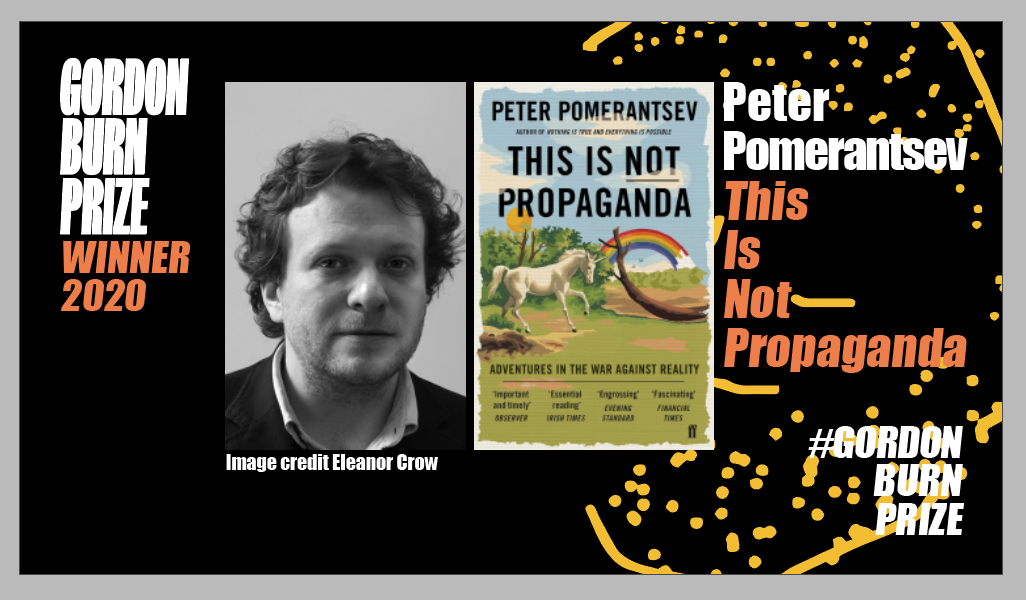 This Is Not Propaganda by Peter Pomerantsev has won the Gordon Burn Prize 2020. The literary prize is open to books from the UK, Ireland and the USA and recognises the year’s boldest, most ambitious and uncompromising work.

The Gordon Burn Prize was announced on Thursday 15 October in a digital event streamed as part of Durham Book Festival. The prize was judged by the writers Anthony Anaxagorou and Richard T. Kelly, artist Rachel Howard and journalist and broadcaster Sali Hughes, who presented at the event.

Four years on from his stunning debut, Nothing Is True and Everything Is Possible, Peter Pomerantsev’s This Is Not Propagandais a compelling, insightful and disturbing book about our ever-shifting world.

Mixing case studies, analysis and family history, Peter Pomerantsev broadens his scope outwards from Moscow and London to a more global canvas, as he looks at the origins and spiralling problems of the disinformation age. Timely and important, it confirms Pomerantsev as one of our most stylish, dexterous and important new non-fiction writers.

Peter Pomerantsev is a Senior Fellow at the Institute of Global Affairs at London School of Economics, studying twenty-first-century information manipulation and how to fix it. An author and TV producer, he is a widely cited expert on disinformation and media. Nothing Is True and Everything Is Possiblewon the Royal Society of Literature Ondaatje Prize 2016 and was shortlisted for the Gordon Burn Prize 2015.

The Gordon Burn Prize was founded in 2012 and is run in partnership by the Gordon Burn Trust, New Writing North, Faber & Faber and Durham Book Festival. The prize seeks to celebrate those who follow in the footsteps of the groundbreaking author Gordon Burn, who died in 2009 and whose work includes Happy Like Murderers, Alma Cogan and Born Yesterday.

Eight years on from the prize’s inception, it has become one of the most highly anticipated prizes on the literary landscape. Previous winners include For the Good Times, David Keenan (2019); Census, Jesse Ball (2018); and The Long Drop, Denise Mina (2017).

Through both fiction and non-fiction, the 2020 shortlist took the reader on an unflinching journey through race, sexuality and class, probing into some of our most complex relationships, most troubling politics and profoundest sources of identity as it ranged from global power play to the broken care system.

The announcement of the Gordon Burn Prize is available to watch here via Crowdcast until 1 November.