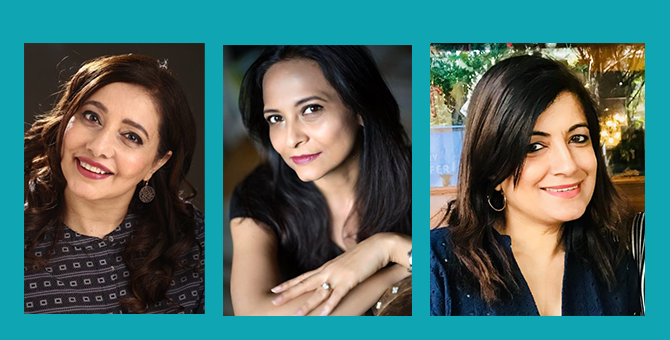 The Whole Kahani (The Complete Story) are a group of British writers of South Asian origin. They were formed in 2011 to give a new voice to British-Asian fiction and increase the visibility of South Asian writers in Britain. They were invited to Durham Book Festival to talk about their new anthology, May We Borrow Your Country. I spoke with Reshma Ruia, Kavita Jindal and Nadia Kabir Barb.

What inspired your new anthology and how does its themes contrast with Love Across a Broken Map?

RR: We wrote this in light of what was happening in the world. What is happening politically, culturally, economically seems to focus on putting up barriers, drawing walls, and this tribalism has come up. We wanted to question and challenge that and ask what it means to be a citizen of a particular country.

NKB: As a collective, people tend to ask what we are doing next and they expect it to be different even though they also want more of the same thing. Our theme is displacement; even though it is also about relationships it is about geographical and emotional relationships rather than love. So there will be a theme, but it will try to draw it all together.

KJ: It’s also about the multiple identities that most people have. It’s similar but different to Love Across a Broken Map because that is about relationships, meanwhile this goes beyond and talks about displacement and dislocation and how this affects identities.

Do you think there is a sense of frustration in the anthology, particularly in response to the current political climate?

KJ: When I was writing ‘Jungle Drums Lead Us’, I was inspired by a video clip of a someone who belonged to a far-right organisation in America. He was being interviewed by a reporter who tried to challenge these notions, but he just wouldn’t listen. In the poem, I try to say that the chasm is so wide that you can keep talking but if they’re not going to listen, then they’re not going to listen so I suppose this frustration must come out in the poem.

RR: There is a level of frustration and anger because many of the protagonists are standing at a cross-roads and they’re trying to hold onto a past that they can’t recapture and the future is murky and unclear. They’re looking for answers, but the answers might not be there.

In academia, writers who are not from the UK or the USA are often categorised under ‘World Literature’ or ‘Postcolonial Literature’. Do you think this is helpful or hindering?

RR: I am grateful because it is an enormous achievement that they are being acknowledged. But literature is literature and the moment you try and confine it, you’re losing the richness of it. You’re pigeon-holing again and perpetuating this feeling of ghettoization.

NKB: I think it depends on the writers too because some of them are post-colonial but the younger generation are actually post-post-colonial and they might be lumped together but that doesn’t mean it’s right.

What are the biggest challenges for women who have to juggle different cultural identities, particularly for female students travelling to study in the UK?

RR: In South Asian countries, the premise for women is that at a certain age you have to get married. There is this duality; my parents wanted me to study and get a good job but I also had to get a husband and have kids by age 26 or 27. So there is a pole of the tradition and a pole of the modernity and sometimes you are caught in between and this creates tension.

NKB: I have two girls and a boy and I have tried hard to treat them equally. When I was a student here, there were certain self-imposed rules because of what people would say which affected my decisions. As I got older, I realised I’m living my life and nobody else is and I can deal with consequences of my own decisions.

The mother-in-laws in the anthology are almost antagonist but also victims of the patriarchy. What are your views on these characters?

RR: I think to some extent they do reflect the reality because they don’t set out to be wicked, but they are perpetuating that hierarchy. The idea of entering your husband’s house means you have to adapt and fit into the family without leaving any trace. You almost have to be reborn.

KJ: Again, we are harkening back to Jane Austen times where a male child is more important, and the mothers believe that. In a way, we are slightly over-caricaturing because there are plenty of those kinds of mothers, but there are plenty of other kinds too. These mothers are better for a story because you can see what you’re coming up against.

Are you optimistic for South Asian female writers in the future?

NKB: We have to be optimistic. This being ‘pigeon-holed’ is what we need to address. It’s very difficult because you can’t just write without being inhibited or censoring yourself because you think if you write this, then this is going to be the reaction.

RR: Preti Taneja, who wrote the foreword to our anthology, is a case in point of an Asian writer who is breaking out of this. She re-wrote King Lear in We That Are Young and won the Desmond Elliot prize. We have to be optimistic, we have to say we are here and we want our voices to be heard.

KJ: And there are discerning readers, I think if you give them a book they will read it. Publishers and agents worry about what they’re putting out because they think readers won’t read them and because they want them to identify with the characters, I don’t think that’s true. So we still haven’t got there, but we will get there.

What advice would you give aspiring South-Asian or British-Asian writers?

KaJ: I would say don’t follow a trend unless it fits you naturally because by the time you fit the trend it will be gone. Be prepared and have great self-belief despite what people say because it’s a tough world out there and you need a tough skin.

RR: It’s a very lonely world as well because writing is very solitary, so you need a certain amount of discipline and you need to make space for it. You have to be dedicated since writing is a vocation.

NKB: And you need to write the story that you want to write. Don’t write something that you expect other people will like or will want you to write because if you do that then you don’t write with an authentic voice. You have to write what you believe in.