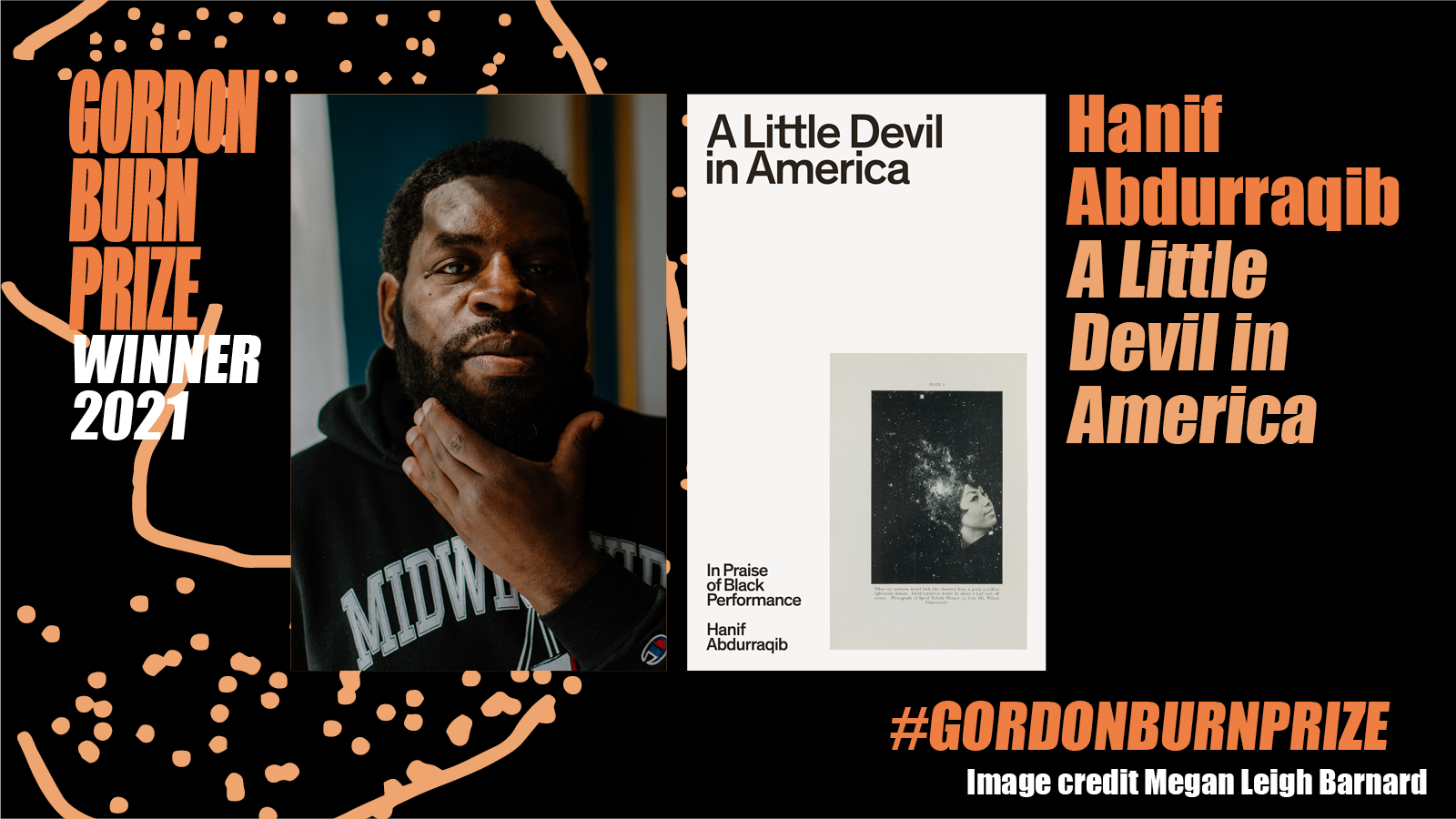 We are thrilled to announce that the poet, essayist and cultural critic Hanif Abdurraqib has won the Gordon Burn Prize 2021 for his collection of essays, A Little Devil in America: Notes in Praise of Black Performance.

The Gordon Burn Prize celebrates the year’s most dazzlingly bold and forward-thinking fiction and non-fiction written in English. A Little Devil in America was selected from a six-strong shortlist by the prize’s judges, author Denise Mina; writer and poet Derek Owusu; novelist and short story writer Irenosen Okojie; and literary journalist and editor Sian Cain.

Inspired by Josephine Baker’s words ‘I was a devil in other countries, and I was a little devil in America, too’, Hanif Abdurraqib delivers a meditation on Black performance in the modern age that reaches back through the lives of musicians, cultural figures, history and his own personal story of love and grief. Each performance in A Little Devil in America offers layers of resonance, both personal and political, whether it’s the twenty-seven seconds of ‘Gimme Shelter’ in which Merry Clayton sings, or the magnificent hours of Aretha Franklin’s homegoing; Beyoncé’s Super Bowl half-time show or a schoolyard fistfight.

Hanif Abdurraqib was recently named a MacArthur Fellow 2021 and A Little Devil in America is currently a finalist for the National Book Awards 2021. Hanif’s first collection of essays, They Can’t Kill Us Until They Kill Us, was named a book of the year by The Los Angeles Review and Chicago Tribune, among others. His previous book, Go Ahead in the Rain: Notes to A Tribe Called Quest, debuted on the New York Times bestseller list.

The Gordon Burn Prize, founded in 2012, remembers the late author of novels including Fullalove and Born Yesterday: The News as a Novel, and non-fiction including Happy Like Murderers: The Story of Fred and Rosemary West and Best and Edwards: Football, Fame and Oblivion.

Now in its ninth year, the prize seeks to celebrate those who follow in Gordon Burn’s footsteps by recognising literature that is fearless in both ambition and execution. The works recognised often make the reader think again, playing with style or genre, pushing boundaries or diverging from the mainstream literary culture.

Previous winners of the Gordon Burn Prize include Peter Pomerantsev in 2020 for This is Not Propaganda, his study on the war against reality; David Keenan in 2019, for his novel For the Good Times, set during the height of the Troubles in 1970s Belfast; Jesse Ball in 2018 for Census, his fable inspired by his late brother; and Denise Mina in 2017 for her true crime novel The Long Drop.

Hanif Abdurraqib receives £5000 and the opportunity to take up a writing retreat at Gordon Burn’s cottage in the Scottish Borders.

The full shortlist for the Gordon Burn Prize 2021 is:

A Ghost in the Throat (Tramp Press), Doireann Ní Ghríofa