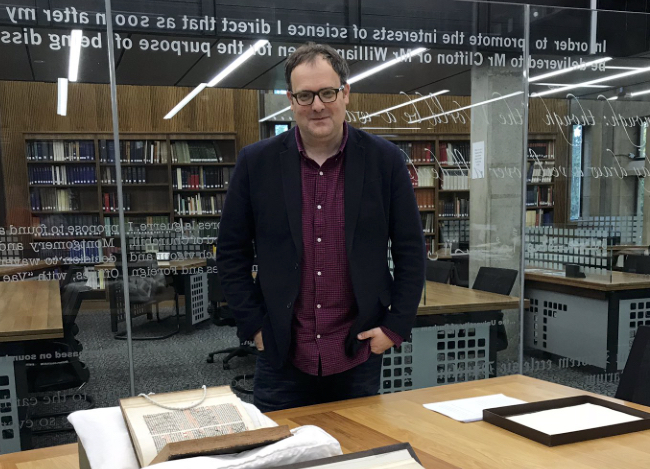 In my opinion, one of the most fascinating parts of history is the conflict which has arisen in every period – such as disagreements between religions, or punishments under different monarchies. I was therefore delighted to be participating in Durham Book Festival’s ‘Into the archives’ event. A handful of us had the opportunity to delve into some of the most dangerous books in the world (all relating to freedom of speech). This was followed by discussions led by Dr Alex Barber, a history lecturer at Durham University.

The oldest book at the event was 500 years old. Dr Barber explained why certain materials were so dangerous to have, including John Milton’s Areopagitica (which argued that ideas should be left free), or those artefacts regarding William Prynne (who had his ears cropped for seditious libel). The fascinating books within the archives have many sources, leading back to historic families in Bamburgh, and collectors such as Thomason. A book seller in the 1640s, he built up a large collection which participants at the event could admire and inspect for themselves.

The artefacts of the event allowed us a glimpse into how dangerous ideas have been handled over the past 500 years. For example, certain extracts of the material were scribbled out by authorities, who believed these views should no longer be taught, and meted out severe punishments to those found in possession of them.

After the event ended, I had the chance to sit down with the event host Dr Alex Barber, who explained why he was so passionate about freedom of speech in history, and where his interests began.

Where did your interest in history begin, and what is your experience with history?

I loved history at school! I suppose it might have been the only thing that I was really good at. I was really lucky… I went to University and met a really inspiring and passionate lecturer called Justin Champion. He was a Professor of ideas, and was one of those people who could really show you the passion that he had for history as well.

I’m interested in people and how they produce things. I actually really love ideas: how and when people write (and think!) about ideas; how they change our society. I think its’s quite unusual for many historians now, as they are social historians or very political historians. I was taught about ideas, so I continued to love them a lot, and that’s still what I’m really passionate about.

What do you think is most difficult about being a historian?

There are two really positive things about good historians. Good historians like being confused and wrong! Sure, you don’t want to be wrong for the rest of your life, but being confused and wrong means you’re going to learn, and you’re going to think about new ideas. That side of it is hard because I think (especially when you’re young) that it’s really difficult to be confused and wrong and it worries people, but that is one of the great things about being a historian. It’s hard even as you get older, because you’re desperate to be right, but I think you learn that process and that’s really important for our society.

I know you mentioned earlier that you’re writing a book on freedom of speech which isn’t finished or published yet, but what can you tell me about that?

I’m writing a book about the lapse of the Licensing Act of 1695, which is a piece of legislation requiring you to talk to the government before you publish something. It accidentally lapsed and causes huge amounts of extra publication. So, in scholarship, it is seen as a key moment in the development of English society: where England becomes modern, because modern society is a space to believe in a free press and free speech. One of the things I wanted to write about was that whilst that might be true over the long period, when I read all the material around it, I realised that most people didn’t think that at the time. They thought that it was a really difficult moment and it caused instability in our society.