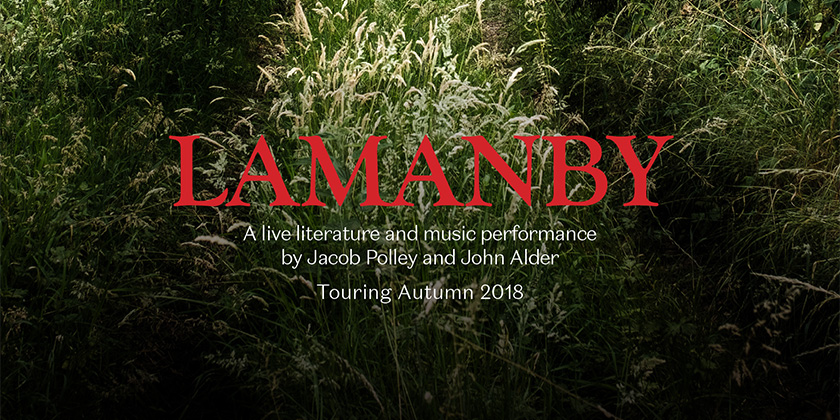 ‘Lamanby’ is based on Jacob Polley’s award-winning book of poems, Jackself. The story of an extraordinary house and a troubled friendship, as well as a dream-vision of boyhood, ‘Lamanby’ is charged with drama, strangeness and poetry. Through an intricate sound-world of voice, birdsong and live music, ‘Lamanby’ movingly explores how we might hold on to what matters.

Directed by Tess Denman-Cleaver, ‘Lamanby’ is a live literature performance by poet Jacob Polley with music and sound by John Alder and film by Ian Fenton. COmissioned by New Writing north for Durham Book Festival 2018.

“The poems in my book Jackself are all linked. They tell a story in which characters argue, are rude and angry and tender, frightened and frightening. The book was published in 2016, but before then, when I was sitting on the manuscript, I began to think that this work gave me chances I’d never had before to find new and exciting ways to give voice to what I’d written and have these characters spring to dramatic life.

‘Lamanby’ is one of these chances – a chance I took to collaborate with the composer and musician, John Alder, to create an intricate sound-world of birdsong, weather and music that the characters live through. The BBC then gave me and John the chance to develop ‘Lamanby’ as a drama first for the radio, where great poetic dramas for the voice have had such great opportunities to be heard.

So far, John and I have developed two radio dramas with the same characters for the BBC, and from these radio dramas we’ve continued to perfect a live event. This live event – a performance by me and John of words, music, sound and film – is what ‘Lamanby’ now is. I’d been used to giving readings of my poems, but this live event is something completely different. As an experience, it has an immersive, ritual quality, beginning in darkness and zooming through the house of Lamanby and through the seasons and years of a friendship between two boys, Jeremy Wren and Jackself. The poems that I’d written for the page are something very different in this form – half poem, half song, and brilliantly set by John – and they’re part of a three-act drama with what I’ve come to recognise as its own structural and emotional dynamic over the hour of the event. I love the liveness of the performance, the thrill of being on the same wavelength as John, so the two of us can hit the right cues, notes and atmospheric effects. And I love the chance the performance gives me to draw on and evoke a version of my own childhood landscapes, both real and imagined, which are brilliantly green and vivdly aural, full of foxgloves, cow parsley, hidden rooms, secret pools and monsters.”

JACOB POLLEY is regarded as one of the leading talents of the new generation of British poets. His fourth book of poems, Jackself, won the 2016 T.S. Eliot Prize for poetry. His first novel, Talk of the Town, won the 2010 Somerset Maugham Award.

JOHN ALDER played guitar and was co-songwriter with British rock band, ‘The Jags’. An award-winning composer on BBC nature documentaries, John has also been a composer and sound designer for theatre productions with Northern Stage, Quarantine, The National Theatre of Scotland and Live Theatre.